The Power of Positive Coaching

The Power of Positive Coaching

Imagine you’re coaching a big soccer game, against an undefeated team that has beaten your team in all your previous matches. Your 11-year-olds are playing well and are ahead. Then, in the closing minutes, the official makes a bad call that goes against you and, because of it, you lose. After the game, the parents of your players scream at the official. The kids are disappointed, looking up at you. What do you do?

Or you’re coaching tee-ball and one of your 5-year-old players has failed to get a hit so far. Now, he’s up again in a crucial situation and is nervous. All eyes are on him. His first swing misses high. The second misses low and knocks the ball off the tee. You call him over to offer some help. What do you say?

The meaning that coaches or parents help young people derive from sports can shape their lives.

Or you’re a parent and your 14-year-old daughter has just come off the basketball court. In the final seconds of the game, with her team behind by a point, she was fouled and awarded two free throws. What do you say if she missed both of them and her team lost? What if she triumphed? (Tune in on Wednesday for the answers!)

Coaches can be enormously influential in the lives of children. If you ask a random group of adults to recall something of significance that happened in their fourth or fifth grade classroom, many will draw a blank. But ask about a sports memory from childhood and you’re likely to hear about a game winning hit, or a dropped pass, that, decades later, can still elicit emotion. The meaning that coaches or parents help young people derive from such moments can shape their lives.

But today’s youth coaches often struggle to provide sound, evidence-based, and age-appropriate guidance to players. Part of the problem is that of the 2.5 million American adults who serve as volunteer coaches for youth sports less than 10 percent receive any formal training. Most become coaches because their kid is on the team ¯ and they basically improvise. I did this in soccer and, through my over-eagerness, almost destroyed my then-6-year-old son’s delight for the game.

That’s why it is so disturbing that, over the past two decades, researchers have found that poor sportsmanship and acts of aggression have become common in youth sports settings. Cheating has also become more accepted. Coaches give their stars the most play. Parents and fans boo opponents or harangue officials (mimicking professional events). They put pressure on children to perform well, with hopes for scholarships or fulfilling their own childhood dreams. Probably the most serious indictment of the system is that the vast majority of youths ¯ some 70 to 80 percent ¯ drop out of sports shortly after middle school. For many, sports become too competitive and selective. In short, they stop being fun. 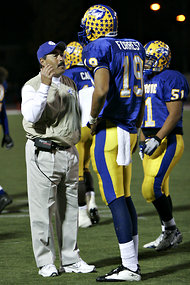 What’s needed is a culture change. That’s the goal of the Positive Coaching Alliance, a modest-size organization that punches well above its weight. P.C.A. has trained 450,000 adults, mostly coaches and youth sports leaders, who reach about 4 million children and youths. The organization is working to spread the message that youth sports is about giving young athletes a positive, character-building experience ¯ not to become major league athletes, but to become “major league people.”

P.C.A. has conducted in-person and on-line trainings with coaches from 1,700 youth sports organizations including Little League Baseball, the American Youth Soccer Association, U.S. Lacrosse, and the Amateur Athletic Union, which has committed to put all of its 50,000 coaches through P.C.A.’s online trainings. The Dallas Independent School District, which oversees 800 youth sports coaches, has enlisted P.C.A. for trainings. “There’s been such a push from parents about winning at all costs,” explained Jeff Johnson, the district’s athletic director. “Sportsmanship sometimes goes out the window. The positive coaching has helped my coaches think about more than just winning.”

Many advocates dream of reforming youth sports, but P.C.A. is distinctive for its approach. Through its messaging, it reassures coaches that it’s O.K. to win ¯ that, in fact, a “relentlessly positive” coach will usually be more successful on the scoreboard. As such, P.C.A. has been able to penetrate the hard-nosed culture of competitive sports. The organization is supported by top professional coaches like Phil Jackson who led the Los Angeles Lakers and Chicago Bulls to 11 National Basketball League titles, and Doc Rivers of the Boston Celtics. This gives the organization credibility. Finally, P.C.A. has artfully packaged complex psychological research into simple tools that any coach or parent can put into practice. As a father of an 8-year-old who has happily regained his love of soccer thanks to a very positive coach, I can attest to the value of its teachings. Research has found that youth attrition rates are 80 percent lower for children whose coaches practice positive coaching (pdf, p.11).

P.C.A. was founded by Jim Thompson, a teacher who previously directed the Public Management Program at Stanford Business School. Years before, Thompson had taught in a classroom with severely emotionally-disturbed students, where he became skilled at managing and motivating children. When his son turned 6 and started getting into sports, Thompson discovered parents and coaches violating all the rules he’d learned: putting pressure on children to perform, trying to give kids technical advice while they were anxious or frustrated, rewarding misbehavior by giving it extra attention, making children worry about making mistakes. He started coaching, discovered he loved it, and collected his ideas in a book: “Positive Coaching, Building Character and Self Esteem Through Sports.” (He has since authored seven others.) With the support of Stanford’s Athletic Department, he launched P.C.A. in 1998.

The core of P.C.A.’s approach is to train “double goal” coaches: coaches who balance the goal of winning, with the second, and more important, goal of teaching life lessons. Coaches are taught to help children focus on improving their own game, helping their teammates improve their game, and improving the game as a whole. (In life, this translates to improving yourself, being a leader who helps others flourish, and working to make society better.) P.C.A. encourages parents to let go of winning and concentrate on life lessons. “There are only two groups of people whose job is to win games,” says Thompson. “Coaches and players. Parents have a much more important job: to guide their child’s character development.”

Because there are so many opportunities to fail in sports, it is a gold mine of teachable moments.

To deliver these concepts, Thompson built up a network of 100 expert trainers and developed catchy acronyms and simplified conceptual tools. For example, sports psychologists know that athletes who focus on things they can control, as opposed to external factors, are less anxious, more confident, and consequentially, happier and better performers. Thompson wondered how to translate the ideas so they could be picked up by any coach.

He came up with the “ELM Tree of Mastery” to help coaches remember that the feedback that most helps young athletes develop their potential is not praise for good performance or criticism for bad performance. What works best is helping children understand that they control three key variables: their level of Effort, whether they Learn from experiences, and how they respond to Mistakes.

Because there are so many opportunities to fail in sports, it is a gold mine of teachable moments. “If a child misses a big play, it’s a perfect opportunity to talk about resiliency,” explains Thompson. “‘I know you’re disappointed and I feel bad for you, but the question is what are you going to do now? Are you going to hang your head? Or are you going to bounce back with renewed determination?’”

“The single most important thing we do is help coaches teach kids not to be afraid to make mistakes,” he adds.

In a fast-moving game, things happen in seconds. When a 12–year-old kid makes a mistake on an athletic field, he will immediately look over to his coach or parent. “If the coach is saying, ‘Don’t worry about it,’ it’s actually not very helpful,” notes Thompson. The key is to get rid of the mistake quickly and decisively. So P.C.A. encourages coaches to establish a “mistake ritual.” One technique, adopted by many, is teaching players to “flush” their mistakes. Using a hand gesture that mimics flushing a toilet, a coach can signal from the sideline and players can signal to each other. “So the kid looks at the coach and the coach goes: ‘Flush it.’ The teammates are saying: ‘Hey, Flush it, we’ll get it back.’ And the kid plays better. Because if you’re not beating yourself up, you can focus on the next play.” After the game, the coach can talk to the player about what happened and why.

P.C.A.’s techniques are grounded in the idea that every child has a kind of “emotional tank.” When it gets drained, it’s difficult to take on challenges or perform well. Coaches need to learn to recognize this and adjust accordingly. P.C.A. even has a “magic ratio” ¯ the ideal ratio of positive (i.e., tank filling) statements to criticism ¯ should be 5 to 1.

Focusing on filling the emotional tank is not wimpy or soft. Professional coaches, like Phil Jackson, have used it to great success. It takes effort to do well. Coaches need to observe players closely so they can offer specific and honest feedback. (Kids know false praise when they hear it.)

Nor does it mean a coach can’t have hard conversations with players. The key is not to withhold criticism, but to deliver it in a way that is helpful. If the child is angry or sulking or defensive, she’s not going to be listening very well anyway. “When you ask people to focus on mastery, it’s not soft,” notes Thompson. “And screaming at a kid is not tough. That’s just a lack of impulse control.”

Ken Eriksen, head coach for the U.S.A. Softball Women’s National Team, has incorporated another technique from P.C.A. called the “criticism sandwich.” “I love the philosophy of praise-critique-praise,” he told me, speaking by phone from the Pan American Games in Mexico. “Instead of getting into a kid: ‘Hey, What’s the matter with you? Didn’t we just go over this?’ I like to take the approach: ‘Hey, young lady, you’re doing a great job. You know on that approach to a ground ball, maybe I would use a different footwork. Other than that I cannot commend you enough on your hard work.’ It works so much better.”

“People often think that youth sports is simple, but it’s actually very complex,” observes Thompson. “The symbolism of sports is so powerful. You’ve got coaches whose identity is tied to whether their team wins or not. You’ve got parents who have all this anxiety about their kids being successful and happy, living in a culture that put so much emphasis on winning or getting into the best schools. And you’ve got the kids who are nervous, worried about establishing their own identity, who want to please their parents, and are afraid about looking bad in public.

“But because sports is so valued, we have the opportunity to change the way people relate to their kids through it. Most research indicates that people coach the way they were coached. So you now have kids who are growing up coached with this model and soon they’ll become coaches themselves, so I think the general impact on our society could be huge.”

Have you had a memorable experience with a coach that stuck with you (good or bad)? On Wednesday, I’ll respond to comments, provide some more details about P.C.A.’s techniques, and reveal how Thompson told me he would handle each of the scenarios above.